If you go down to the woods today (yup, it’s time for a Teddy Bears’ Picnic!) 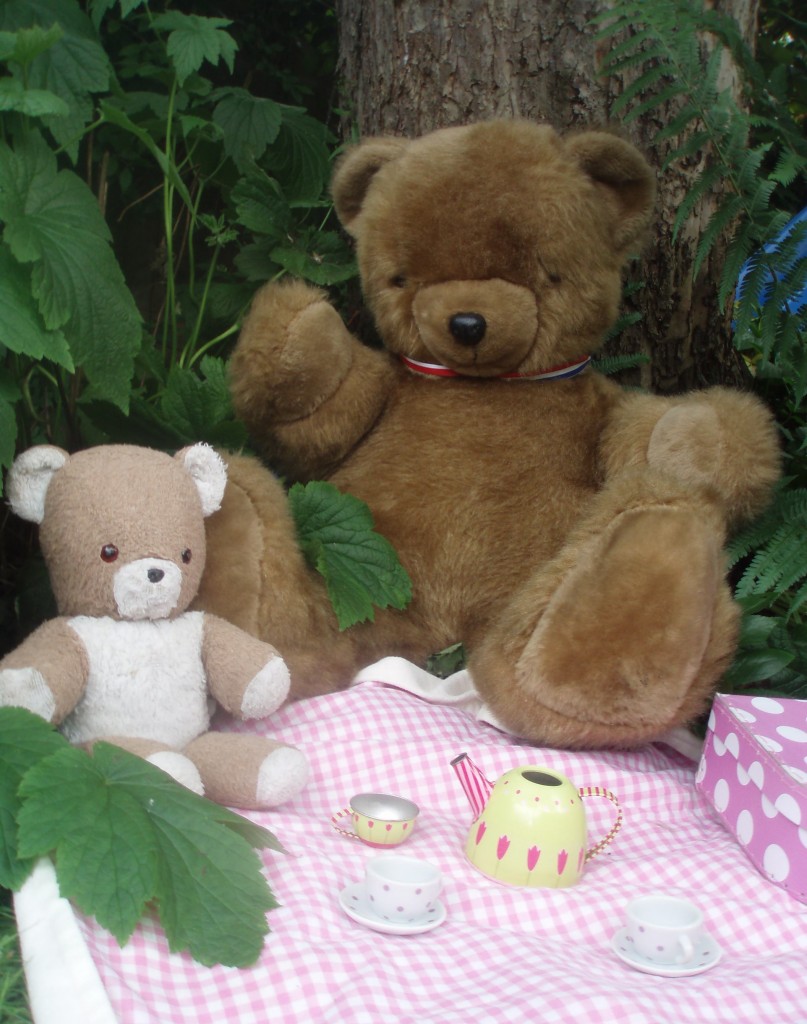 “That’s the way the Teddy Bears have their picnic”

I was determined not to start this blog entry with the words ‘if you go down to the woods today’ but that is simply impossible.

Hahahopscotch is going to be playing Traditional Garden Games  at Wicksteed Park’s Teddy Bears’ Picnic (apparently, they’re hoping to break the world record for over 35,000 bears!) and ever since I found out, those words have been sticking in my head with even more tenacity than jam on small people’s fingers.

We recently held our own little Teddy Bears’ Picnic (an intimate affair involving only 3 children and a humble 24 bears) and it was such a hit with even my surely-soon-to-be-grown-up-and-sophisticated nine year old boy that I was moved to ponder the attractions of this pleasantly silly pastime.

The ritual of choosing loved bears to invite, of transporting them and the picnic to a destination (even if it be the back garden), spreading out the rug and arranging any foodstuffs somehow adds sparkle to what is essentially a process of eating a sandwich in the outdoors with a cuddly toy. Suddenly,  you have created a magical occasion.

Most of a child’s time is spent being orchestrated by a grown up – where to go, how to sit, what to eat …  and whether it’s ok to have sticky fingers. But during a Teddy Bear’s Picnic, the child takes on the role of host, overseeing the situation and calling the shots (“At six o’clock their Mummies and Daddies will take them home to bed ’cause they’re tired little Teddy Bears” … how often do kids get to make that decision?!).  How splendidly empowering! There’s not much can beat the wonder of seeing a child absorbed in making sure their bear is comfortable, of offering round the juice, and of making sure the entertainment is up to scratch, whilst you sit back and enjoy the moment.

It doesn’t matter where you choose as a location – garden, park, meadow or living room floor  – because for the duration of the Teddy Bears’ Picnic it will be transformed, by the unstoppable power of imagination alone, into ‘The Woods’ where “beneath the trees where nobody sees they’ll hide and seek as long as they please”. Who knew that there might be a swarm of bees hiding behind the telly, or that in the corner of your garden there might be a lonely woodland cat wanting to join in, or that the local playground contains so many invisible but magnificent trees?

Apparently, the Teddy Bears’ Picnic lyrics were written in 1932 by an Irish songwriter, Jimmy Kennedy. Perhaps these two remember the occasion…

So next time you’re out for the day, or even trapped indoors on a rainy afternoon, do please consider inviting along a stuffed but splendid friend!

This entry was posted in Uncategorized. Bookmark the permalink.