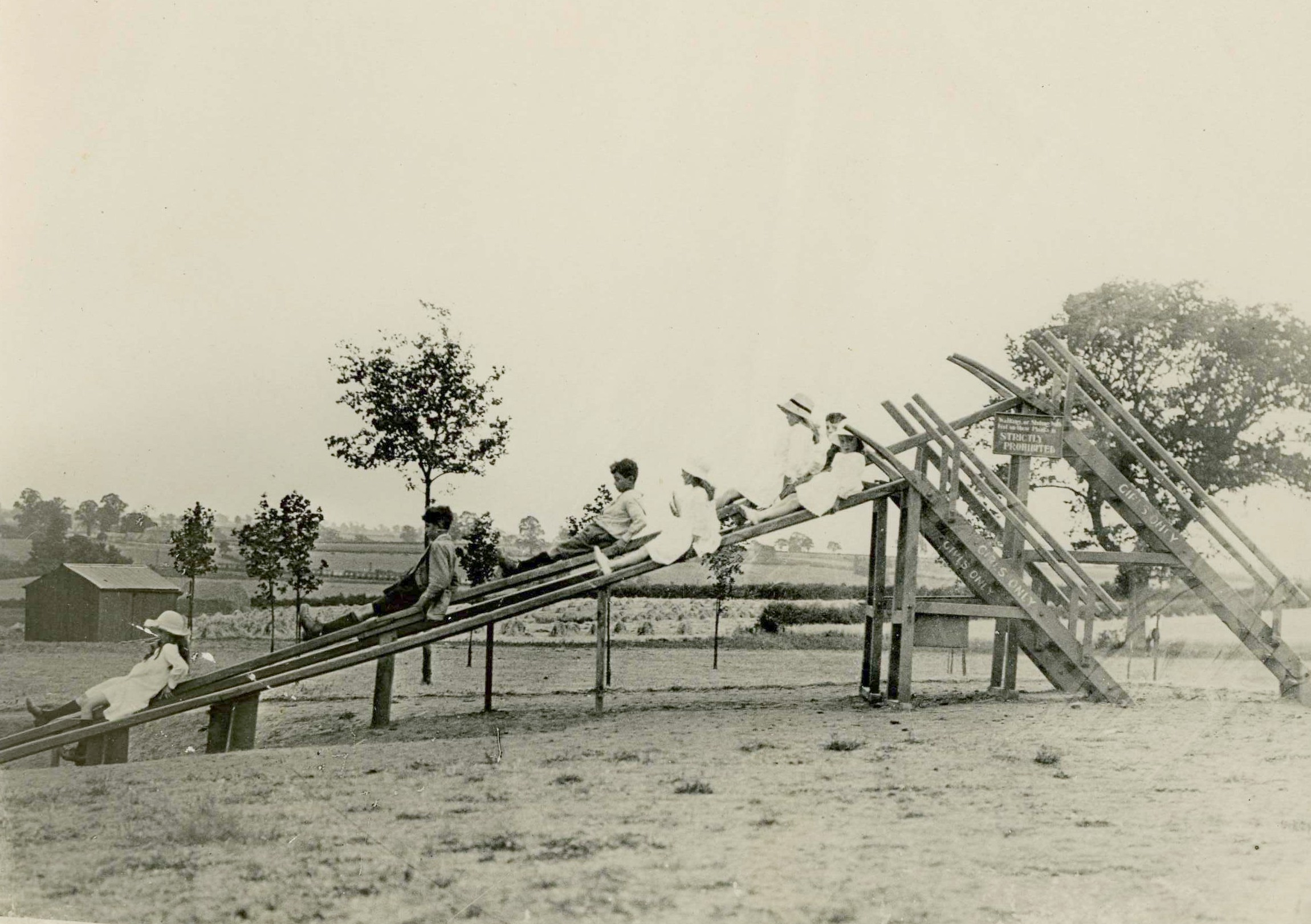 The first slides at Wicksteed Park - made out of wood (ouch!), and with separate ones for girls and boys

This week the BBC have rerun their programme on Wicksteed Park, the pioneering park and playground established in the early decades of the 20th century by my dishy hero, Charles Wicksteed. Do watch the filmette, at http://www.bbc.co.uk/i/b01pwrrs/?t=19m59s, not least of all because I make a little appearance as the grand finale!

This inspired me to dig out A Plea for Children’s Recreation after School Hours and after School Age, the rather moving booklet that Charles published in the 1920s as his ‘call to arms’ to try to improve children’s play opportunities in the days when quality playgrounds were relatively few and far between. Every time I read this brilliant little publication I am moved by the compassion in it, and overwhelmed by its relevance today – Charles talks persuasively about the need for fresh air to aid children’s health, about misguided local authority spending plans and neglect of child welfare, of how to tackle hooliganism, and of missed opportunities for play areas in urban environments.

I suspect that many of my future blog posts will draw upon Charles Wicksteed’s wonderful words, but to start off with, I thought you might be rather interested in his simple account of how the world-famous playground at Wicksteed Park first began, around the time of the First World War.

“The beginning of the playground came not by design but by accident. We had a Sunday School Treat in the Park and put up primitive swings with larch poles, tied together at the top with chains. Fortunately they were not cleared away with the other things the day after the treat, and I ultimately found them so popular that instead of pulling them down I added more to them. But these were not enough for the children, I found them piling up forms one above another on a slope under a tree to form a slide, and breaking them. As a consequence I thought I would make a slide; first for the boys. This was so much appreciated that I made a better one for the girls; the boys got jealous of this, so I made a still better one for them. At that time I had a quaint idea that the boys and girls ought to be separated. [Note from Linden: this gender separation was completely normal at the time – dear Charles shouldn’t have been so hard on himself!] This has been entirely and successfully abandoned, as also any idea of keeping or limiting the playthings to people of a certain age. Babies of two years and old ladies of 80 are not only allowed in the playground but to use the playthings. I may say, by the way, that the gentler sex is far away more game in middle and old age than the men, and the girls “play the game” far better than the boys do. …

Before I had gone far I decided to devote one of the pitches to a playground. That pitch is now covered with playthings and without exaggeration gives hundreds of times more pleasure and healthy exercise to mothers as well as children than any other part of the park. It is not in a corner or railed off, it is put in just the best position. The park has attained a success I never for a moment contemplated in the original formation. … As the playground developed so did the children and mothers come in increasing numbers, followed by the general public. With the development of charabancs Sunday School treats came more and more, let alone parties of other descriptions.”

Ahhh, how I would have loved to have met you, Charles!

You can read a little more about Wicksteed Park at http://www.outdoorchildren.co.uk/portfolio/wicksteed-park-project/

And I wholeheartedly urge you to visit 21st century Wicksteed Park – details at www.wicksteedpark.co.uk